Bullet-resistant insulation glass with wide range of functions from sedak

This means that building security and modern energy characteristics are no longer incompatible in insulation glass façades. sedak isosecure protects without splintering up to the highest bullet-resistance class BR7 NS according to DIN EN 1063. The maximum size of the bulletresistant glass is 3.5 metres x 20 metres. The clever construction of sedak isosecure makes it possible to do without the previously usual polycarbonate system: both of the external panes are made from glass. This preserves the excellent aesthetics of the transparent material and simplifies the handling and cleaning of the insulation glass. Despite this, sedak isosecure protects splinter-free against bullets and demonstrates its resistance against handguns (pistols and revolvers) and even against military assault rifles firing hard-core bullets in the highest bullet-resistance class BR7 NS. A major advantage of the new construction of the glazing is the possibility of using coated glass. The insulation glass therefore fulfils the desired energy standards despite its protective qualities. This makes sedak isosecure suitable for glass façades on sophisticated buildings with a high security level. The new insulation glass also sets itself apart in terms of fire safety. As no polycarbonate is used, sedak isosecure achieves a better fire protection class. Because of its leading production technology, sedak is also able to manufacture this special glass in oversized formats of up to 3.5 metres x 20 metres.

The first four bullet-resistance classes (BR1 to BR4) relate to shots from short weapons such as pistols and revolvers. The three higher bullet resistance classes (BR5, BR6 and BR7) define resistance to shots from long weapons – these include, for example, the American M4 carbine or the NATO G36 and G3 guns. These are weapons that are effective and accurate over longer distances. The different types of ammunition are also taken into account. The especially highly penetrating military hard-core ammunition is covered by the highest bullet-resistance class BR 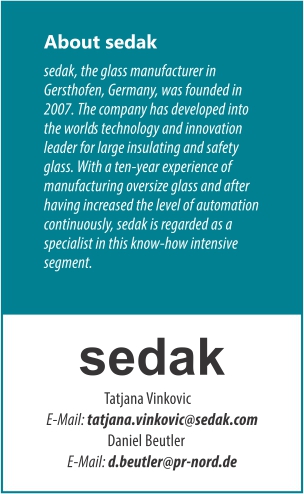